“Please note that this web site is not aimed at consumers as the information herein
contained does not make reference to finished products”.

According to the Framingham Cohort (USA), 25% of people in their 60s and 50% in their 80s show changes in bone health by radiography,[1] and age, female sex, overweight, occupational knee-bending, physical labour, and joint challenges have all been identified as risk factors.

The use of Meriva® for bone health is based on the capacity of this compound to interrupt inflammatory response signaling and increase anti-oxidant levels. Preclinical and clinical evidence suggests that bone health is better supported by a multi-targeted, rather than by a mono-targeted, approach, and agents that modulate multiple cellular targets, like curcumin, have a great potential for the management of these conditions.

Meriva® was evaluated for its efficacy in 50 individuals affected by bone health challenge (X-ray diagnosis confirmation).[2] The symptoms were evaluated by the WOMAC score; mobility was studied by walking performance on the treadmill and the overall inflammatory response function was assessed by measurements of C-reactive protein plasma concentration. 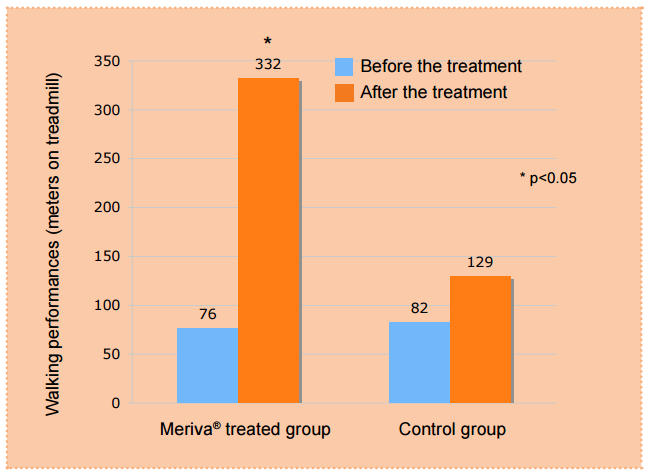 The treadmill performance (10% inclination, 3 Km/h speed) showed an improvement of 201% of the initial walked distance at two months, and a further improvement (+44%) at three months from the beginning of the study.

These positive results were complemented by secondary end-points, namely the decrease in supplemental therapy use (63% in the Meriva® group vs 12% in the treatment group) and the decrease in gastrointestinal complications (38% in Meriva® vs 15% in controls (p<0.05).

Overall, the management costs in the Meriva® group decreased by 49% compared to a non significant 3% decrease for the control group.

In a second study,[3] the activity of Meriva® for the maintenance of bone health was further confirmed in a larger and longer (8 months) investigation, that enrolled 100 partecipants and was, otherwise, methodologically similar to the previous one, including the dosage (1 g/day of Meriva®, corresponding to 200 mg curcumin/day in two separate administrations).

The results showed that the Meriva® group enjoyed a statistically significant reduction in all primary clinical endpoints, the Western Ontario and McMaster Universities (WOMAC) score (decreased from 80.6 to 33.2), the Karnofsky Performance Scale (improved from 73.3 to 92.2), and the treadmill walking performance test.

These results were complemented by the evaluation of a series of inflammatory response function markers wider than the one considered in the first study (interleukin [IL]-1b, IL-6, soluble CD40 ligand [sCD40L], soluble vascular cell adhesion molecule (sVCAM)-1, and erythrocyte sedimentation rate [ESR]) that also showed a marked reduction in the Meriva® treated group. Conversely, no significant variation was observed in the “best available treatment” control group.

More recently, in a 4-month observational study on subjects with knee joint challenge,[4] the ones administered with with Meriva®+glucosamine had significantly higher Karnofsky Index and WOMAC score (both in the physical and emotional domains), compared to those administered with the widely used chondroitin+glucosamine association group.

Noteworthy, the walking distance at the treadmill test after 1 month was also significantly higher in the meriva+glucosamine group; this advantage was sustained until the end of the study: this reduction was more evident for patients treated with Meriva®+glucosamine.

A trial on 106 subjects whose eye middle layer was challenged and relapsing since at least 2 years was carried out.[6] A 1.2 g/day dosage of Meriva® was administered (two separate admin. per day) for at least twelve months, complementing the treatment already in course. 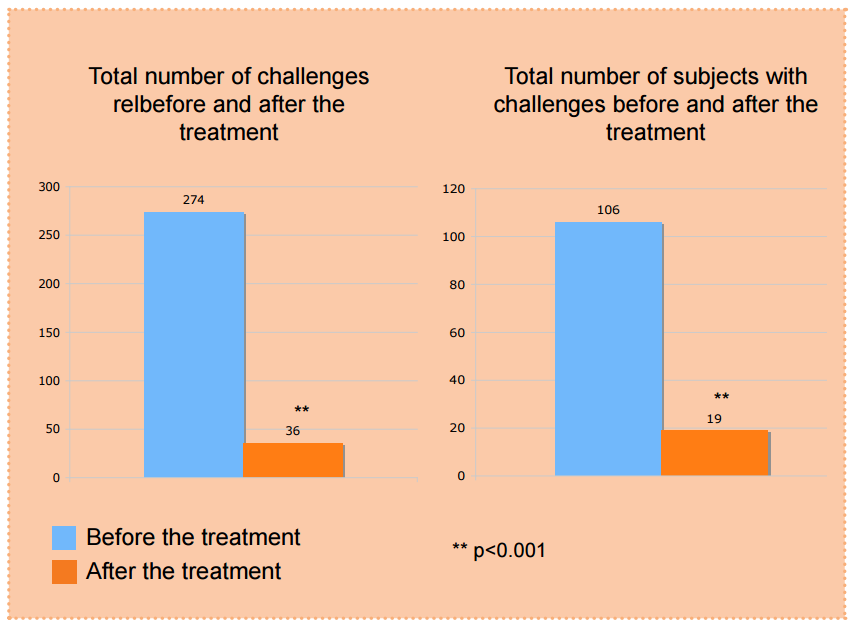 86% of subjects in the Meriva® group enjoyed a subjective improvement of the overall well being after only 4/6 weeks, with a remarkable reduction in challenges. Also the number of subjects with challenges decreased by over 80%. In a recent pilot study, the daily use of 1 g/day of Meriva®, associated with the standard treatment, has shown to ameliorate the visual acuity, supporting healthy vision.[7]

These results qualify Meriva® as a safe ingredient with a strong potential even in poorly vascolarized tissues like the ocular bulb.

The efficacy of Meriva® in addressing common relapsing eye challenges has been evaluated both in a 6[8]  & 12-months[9] pilot and follow-up studies.

Being the primary endpoint the change in visual acuity before and after administration with Meriva®, the results of both studies confirmed that Indena’s curcumin delivery system is effective in the management of eye challenges.

In another registry study,[10] 50 subjects prone to blood vessel challenge were treated with Meriva® (1g/day) to evaluate its ability to support healthy blood vessels. Partecipants were divided in two groups.

The first one received Meriva® for 4 weeks while the second group was used as a control. The presence and evolution of endothelial challenge was measured instrumentally (laser doppler flowmetry, pO2 ) and observationally (evaluation of the foot), after 4 weeks of treatment, the Meriva® group showed an amelioration of all the parameters investigated, as well as a general amelioration of the quality of life, as measured by the Karnofsky scale.

Furthermore, in a previous reported pilot study[7], 38 subjects prone to blood vessel challenge were administered with 1 g/day of Meriva (in addition to the standard management plan) for at least 4 weeks.

Compared to the control group (n=39), following the standard management plan alone, the Meriva® group showed a statistically significant improvement in the vessel response (p<0.05) and the decrease in the score of the peripheral vessel challenge (p<0.05).

In a study on mares and foals,[11] Meriva® was able to downregulate the expression of a series of cytokines, enzymes and transcription factors involved in the natural inflammation response.

Meriva® was administered for 15 days, and gene expression was compared with the initial state at days 4, 8 and 15 from the beginning of the treatment. In mares, curcumin inhibited the expression of COX-2, TNF-α, IL-1β, IL-1RN and IL-6, with special significance being observed for IL-1β and IL-6.

In foals, curcumin significantly inhibited the expression of COX-2, TNF-α, IL-1β, IL1RN and IL-6. In a recent genomic study[12] on dogs, the differential modulation of inflammation response markers by Meriva® and another agent was investigated. Meriva® (40 mg/Kg/day, corresponding to 8 mg/Kg/day of curcumin) or another agent (4 mg/Kg/day) were administered to two groups of 6 JC dogs for 20 days.

Gene expression was compared with a control group of 6 dogs at the beginning (T0) and at the end of the study (T20). At the beginning of the study, the two experimental groups of dogs showed the differential expression of 475 (other agent arm) and 498 (Meriva® arm) genes compared to the control group. These genes could be broadly defined as pro-inflammatory response markers.

Both curcumin and the other agent could significantly attenuate the expression of this genomic signature, since at the end of the study only 173- (other agent arm) and 141 (Meriva® arm) genes were differentially expressed compared to the control group.

From a genomic standpoint, Meriva® outperformed the other agent, since important genes underlying the production of iκB and IL18 were modulated only by Meriva®. Compared to the other agent, Meriva® could downregulate the inflammatory response pathway mediated by TNFα, macrophage proliferation and fibrinolysis.

Taken together, these provide a genomic rationale for the use of Meriva® for the complementary support of joint health, an indication validated by human clinical studies.

A first group of 33 subjects were administered with BSM in association with Meriva® at the dosage of 500 mg/day for at least 24 weeks, while the remaining 28 volunteers (control group) were administered with only BSM. All IPSS scores and quality of life improved in both groups, while in the Meriva® arm were significantly better than in the BSM-only group (p<0.05 for IPSS and p<0.01 for quality of life).

All these results underline the nutritional potential of curcumin as a natural ingredient to support the body’s inflammation response function.

In a randomized, placebo-controlled, single-blinded study,[14] 20 healthy and moderately active subjects received 1g Meriva® or a placebo twice daily, 48 hours prior to a downhill running test, the day of the test, and 24 hours after the test, for an overall 4 day treatment.

The end point was the evaluation of delayed onset muscle soreness (DOMS), that is the muscular discomfort and stiffness that develops after unaccustomed or strenuous exercise, with soreness being felt most strongly 24 to 72 hours after the exercise.

Muscle soreness was quantified by magnetic resonance imaging, laboratory tests, and histologic analyses on muscle samples obtained 48 hours after the test. The intensity of discomfort was also evaluated.

Partecipants were asked to indicate the location of pain on a drawing representing the lower limbs, and to rank pain intensity on a 0-4 point scale, where 0=no pain, 4=disabling pain when descending or climbing stairs.

The observation from the study suggests that curcumin as Meriva® can be beneficial to attenuate exercise-induced DOMS, and larger studies could provide statistical significance also for parameters like the histological evaluation of muscle that only showed a trend to improvement in this pilot study.

The results shown that Meriva® at 500 mg/die is safe, is not doping, leads to measurable plasma concentrations in line with the published results, decreases the subjective perception of stress associated to exercise, and tends to decrease the production of IL-6, a marker of muscle fatigue associated to intense physical activity.

Significant improvements in all parameters, with respect to baseline values, were observed in the two supplementation groups (p < 0.05 for all comparisons). On the other hand, no improvement was observed in the standard management-only group.

At three months, intergroup comparison revealed a statistical advantage in all parameters for both supplementation groups compared with the standard management-only group (p < 0.05 for all comparisons).

The study showed that the addition of Meriva® – either or not combined with other nutritional supplements – to standardized diet and exercise plan contributesto improve strenght and physical performance in elderly subjects.

Researchers measured the quality of life and health benefits and the effects of the treatment on the serum levels of IL-17 and IL-22 that are thought to play a major role in this disorder.

Data from the study demonstrated that Meriva® may be regarded as a safe and well-tolerated supplementation for the complementary support to subjects treated with topical steroids.

Among the several biological effects of curcumin, the ability to downregulate the T cell-mediated process, and in particular the Th22 pathway, may be considered one of the major mechanisms by which Meriva® supports skin dysfunction recovery.